In order to copying and moving text from one document to another (possibly in another application) or even within the same document, you can use clipboardAnd orders Cut, Copy si paste menu available EditThrough buttons on the toolbar Standard or from the context menu of any selected block (opened by pressing the right mouse button). 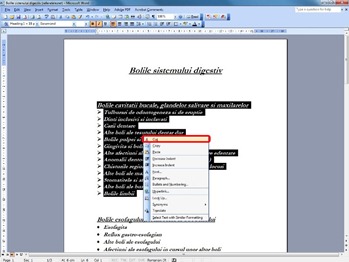 When graphics are copied from other applications we recommend using the command paste Special command instead paste.

A text can be copied or moved within the same document both through clipboardSite, and by moving the mouse directly. Thus, selected text can be moved by dragging it to the new position and copied by maintaining key CTRL down and dragging it to the new position. Note that the same action should be performed and if you want to copy or move a graphic. If the user wants to cancel a previous command will use the function undo, Which can restore the last action performed on the document. Action that needs to be canceled will be selected from the list hidden button undo. To cancel the last command button can act undo or select Undo (Ctrl + Z) menu Edit.

When you wish to restore a previously canceled orders via the undo, Use the function Redo (By pressing the corresponding button, choosing a particular action associated or choosing Redo menu Edit). 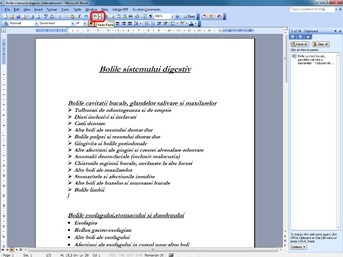 In order to repeat an order previously made, use option Repeat menu Edit. Similarly all objects Windows and window objects document are associated context menus accessible with the right of mouseSite, which allow rapid execution of editing operations. For example, a text can change the font, paragraph format or set different types of lists. If an area is marked text (text block), context menu options is one way to achieve copy or move operations.

Note that objects other than text - images, graphics, tables - can be copied or moved according to the same rules described above. A graphic object can be selected with a click and can be edited with double click or Edit - Object (I can change features, such as thick lines and titles in a chart). These objects also have context menus, which allow various operations and changes fast. An image object can be deleted, copied or moved to clipboard with the same options Clear, Copy, Cut and subsequently deposited paste or paste Special. This last option allows you to select the type of object that will copy / move. Transfer can be achieved between different applications Windows recognizing format. To transfer information between applications was implemented technique OLE (Object Linking and Embedding), Which provides the possibility editing an object encapsulated by launching the application that created the application in which it was transferred. A special type of deposit of an object / element in the document is the introduction of a link to the file it contains (Paste link). 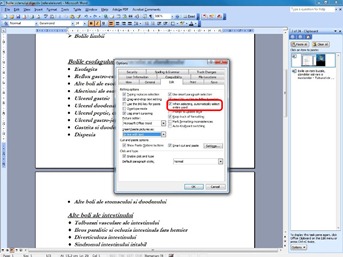 Editing options can be specified in Tools - Options - Edit. For example, if the switch is activated Automatic Word SelectionTo select with the mouse a text area, marking will be done word by word, not letter by letter.

Copy and move blocks of text in Word 2003