When it was released Windows 7, one of the Feature Sites Microsoft introduced this operating system It has the ability to fix (pine) shortcuts but by applications in Taskbar. Users also have the option, both in Windows 7 and in Windows 8, Access files and folders frequently used right-clicking on the icon Windows/File Explorer. Users of these operating systems but wanting to set folders or files (e.g documents) in TaskbarI can not do this than using tweaks (Changing the path of an executable folder or file) or third-party applications.

One of the changes brought by Windows 10 Preview is that users can now fix in Taskbar inclusive files or foldersWithout having to resort to third-party applications or tweaks complicated.

In addition, the folders pinned in Taskbar can be opened quickly and with the help of some Keyboard shortcuts (key Windows in combination with number keys from 1 la 9, where each numeric key is equivalent to the position of a shortcut set to Taskbar).

How can we set folders on Taskbar in Windows 10 Preview?

Although Windows 10 lashing of folders TaskbarIf you right click on a folder you will notice that the option Pin to Taskbar missing from context Menu. But the process is quite simple: 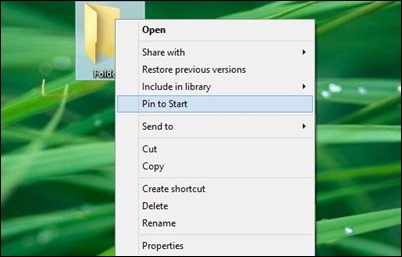 And that's it. This way you can fix fast folders in TaskbarCPC from Windows 10 Preview.

Please note: Windows 10 Preview does not allow you to attach multiple folders at the same time to its Start Menu Taskbar.