One of the novelties introduced by Microsoft with the launch Windows Vista is the ability of users to view a preview (thumbnail) To applications running in the system when placing the mouse cursor over the buttons of their Taskbar. Although it is not considered to be a feature very important system Windows, the vast majority of users use it often enough to quickly identify an application, folder or file minimized in Taskbar, and many of them would prefer that preview appears to be somewhat higher than size default set system.

If you want to increase the size of the thumbnails displayed in TaskbarCPC system WindowsBut do not want to use a customization tool third-party, you can do this simply by registry EditorUsing the instructions below.

How can we increase the size of thumbnails from Windows Taskbar? 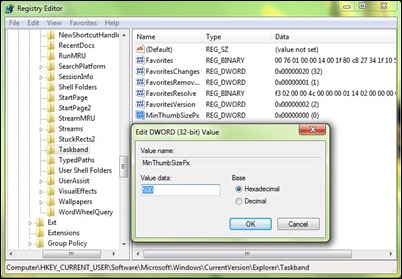 After you make these Registry changes (And after you restart explorer.exe), You will notice that thumbnail size of Windows Taskbar will be higher than that set by the system.

Note: Before making any changes to the system registry, make a backuo of them or create a system restore point to avoid any unpleasant consequences.