Save an Office document in PDF format 2010 can be very simple (a few clicks) and requires only a short time (a few seconds).

How to save a Word file Office 2010 in PDF format: 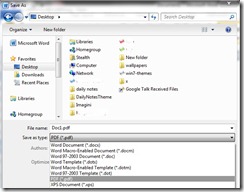 How can we save an Office file format 2010. PDF