After two weeks Microsoft has launched Windows Update 8.1 1 (equivalent to Service Packs for previous systems Windows), It came bundled with a number of improvements, fixes for different system errors si Security updates. Among the most important Feature Links this update include the ability to fix (pine) modern applications in the Taskbar, display the taskbar in modern applications and adding buttons to close modern applications or them minimize the Taskbar. Also they were added buttons Power si Search in Start ScreenAnd right-click tile sites Start of displays context menus (This feature was already available in Windows 8.1 versions touch).

If you recently purchased a computer cu Windows DO NOT preinstallOr need to make a Resettlement System and you have license code for Windows 8.1But for Windows 8, it is not necessary to upgrade to Windows 8.1 and then only at 8.1 Windows Update (available free by Windows Store), But you can upgrade from Windows 8 directly to Windows 8.1 Update following the instructions below.

How to upgrade directly from Windows 8 to Windows NEVER Update? 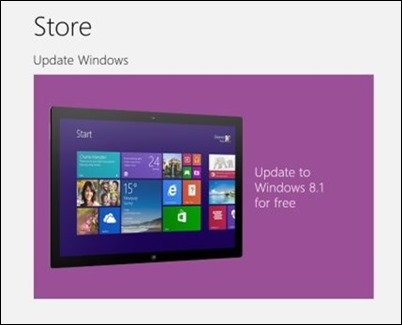 After the update files are downloaded, Windowsit will automatically start the upgrade process. Success!

Note: To make this upgrade, you need at least 5 GB free space on your system partition.

STEALTH SETTINGS - How to directly upgrade from Windows 8 to Windows 8.1 Update

How can we upgrade from Windows 8 directly to Windows 8.1 Update