As I said yesterday, demonoid.com trackers portal is "down" for part of its users (we have not yet figured out if the problem is only in some countries - New and in India and the Netherlands - but it definitely appears only for some users -> Do not know on what criteria). Initially I thought ISP problem youSites, especially the RDS & RCS where we subscribers, but meanwhile appeared and complaints from users that the net UPC or ClickNetAs they appeared confirmations from users on these 3 ISPs such as demonoid.com be loaded without problems. And when? What they have and we do not have? (Or vice versa ...)

One of the possibilities is that problem or portal servers thatA probable error and another that certain IPs to be blocked of them (again, do not know on what criteria). However, our IPs are among those that demonoid.com fully loaded just a white pageRegardless of your browser: Internet Explorer, Mozilla Firefox, Flock or Opera. Although Opera is debatable. That's because, as I said here, The newest version of Opera has several new features including the Opera TurboThe new Opera technology that speeds up navigation when loose connections (saves bandwidth by altering the image quality).

Since we installed Opera 10 the laptop I never used Opera Turbo that because there was no need. But today, after a nice blank page Uploaded by demonoid.com I enabled this feature, we gave reload the page and surprise! 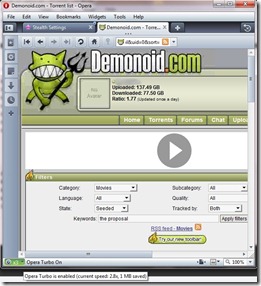 The explanation is simple: Opera Turbo uses proxy serverAnd with this feature enabled access to the Internet is through a proxy and not by IP address assigned by your ISP.

LA1 - After I disabled Opera Turbo and gave a new page refresh, demonoid.com said something like: 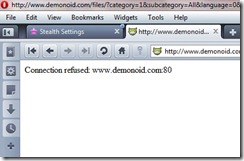 which led me to think that The second option is the correct. Why?

LA2 - I called earlier RDS & RCS and provider confirmed that The problem is not with them. We tried to contact the administrators demonoid.com and we will come back with details.

Demonoid.com can be accessed from the Opera 10!