And again Mozilla has beaten the record of speed with The final release of Firefox 6, Less than two months since announcing launch a hurry Firefox 5.

Although who knows what changes to make browser interface (Unless highlighting web address in the address bar), Firefox 6 boasts a loading speed of up to 20% higher than the previous version (especially for multiple tabs open), which remains to be tested and confirmed (or denied). In addition it comes with about a thousand fixes who want to improve the browsing experience users of Firefox. 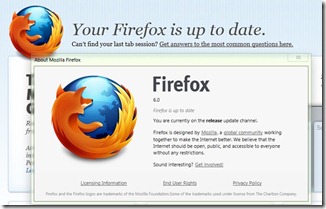 Although we recommend Firefox update by all its users, we suggest still not too attached 6 version number, as it appears that 7 of the is rapidly ago and is rumored to bring something more substantial changes performance and interface.

Note: If you 6 Firefox in another language than English (including Romanian), go to this link.