See the many sites message saying that your PC is infected with a number of viruses and a number of suspicious files. These programs are fake antivirus. Ie fake antivirus programs.
These sites will recommend you to make an urgent online scan then Install an antivirus provided by "experts" who have warned infection The PC. Other online alerts will not warn when installed in your PC so-called antivirus software. It is enough to click a button "Scan Now"And the program begins to install. After installing "antivirus" There are two ways to try to get something out money from your first scan report method. The fake antivirus program scans the PC and will show that you have many Infected filesAnd for them devirusa need to buy program (Do not buy it because you run out of money and anyway your PC will be safe with such software).
The second method is a fake antivirus – spyware. Antivirus malware installs on your PC will send messages that notify you that it detects viruses and displays 100% devirus reporting. In fact, this fake antivirus does nothing but infect your PC with a wide range of spyware, adware, trojans and other wonders like this.
To check if your PC has been installed such a program, application Remove Fake Antivirus will be useful. Detects most popular programs fake antivirus and helps uninstall softwareURLs fake antivirus.

Will help get rid of fake antivirus such as:

The application has only 212 KB and requires no installation. Download and run the executable above application Remove Fake Antivirus.exe. 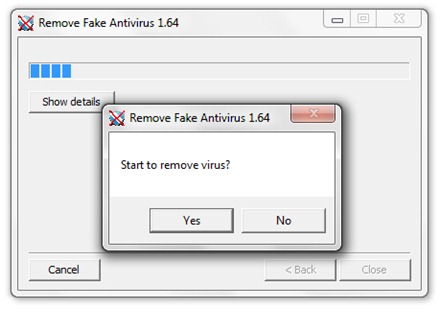 At the end of the scan will display a detailed report. If the discovery of fake antivirus will help start the uninstall process.

This application is compatible with operating systems Windows XP, Windows Sight yes Windows 7.
It is particularly useful for those who are computer service. Often they are called to relatives or friends to computer repair. Such an application helps me easily discover if your PC has been installed fake antivirus.