I think most users Mozilla Firefox 3.6.10 have problems with error right after installing browser. Package installation Mozilla FirefoxComes with add-onCPC Default Manager (v2.2) (Developed by Microsoft), That for security was withdrawn from Microsoft.

"Firefox has determined that the following add-ons are known to cause stability or security problems: Default Manager v2.2" 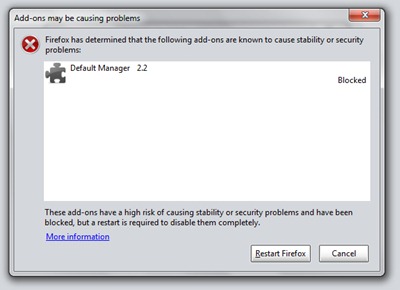 If there is a risk to Mozilla Firefox browser, do not understand why this add-on has been removed with the release of the latest version.

How can we get rid of the crash caused by Default Manager (v2.2) add-on in Mozilla Firefox.

1. After you install and open Moziila Firefox go to Tools > Add-ons and Default Manager 2.2 we click on "Disable". 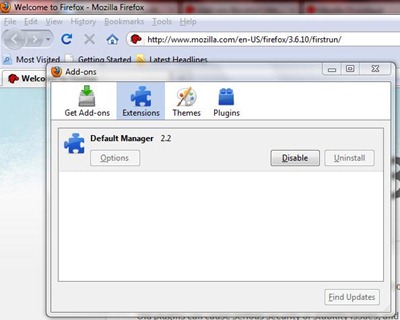 2. After disable add-on make click on the button "Restart Firefox".

Default Manager 2.2 - Disabled for your protection.