In addition, it presents several new interesting features, Such as can increase only certain portions of web pages (of course, of choice: P) and the option to view tabs next to each other (Side by Side). 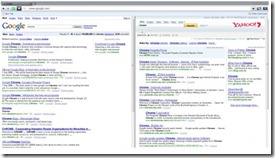 We're doing our best to Quickly churn out new features as They are available, rather Than saving them up for occasional major releases. Riding the beta channel is a great way to let us know what's working and what's not, but do not be surprised to find Some rough edges.

It remains to be seen if this new version will be able to grow popularity of Google Chrome considering that the browser was unable to find too many followers in the 6 months of existence.

Google Chrome - Back in Beta