One of the new characteristics Operating system Windows 7, it is possible to preview in applications the applications opened in taskbar (taskbar application thumbnails). If you have three open tabon the Internet Explorer, just move the mouse cursor over the icon IESite of taskbar and wait about a second to open previous tabs.

This opened the waiting time until thumbnailSites, for some users it may be too small or ... too high. Time Seat default is 400 msBut it can be easily modified registry (regedit).

Here are the steps to follow in order to change the preview time of open applications in taskbar.

2. In the left navigation bar of the editor, go to: HKEY_Current_USERControl PanelMouse

3. Registry list and double click on "MouseHoverTime"And the dialog-box that opens, under"Time Value"You have the option to change the timeout. 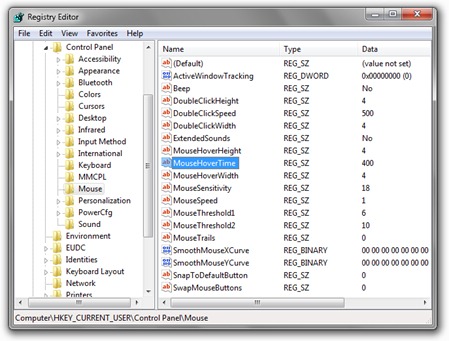 After you click one restart the computer you'll see the effect of this change. Recommended time for MouseHoverTime is between 30 si 2000. Not advise anyone to try value 0 for this option.