A month after the recent release of the operating system Windows 7, Microsoft made public "Map" launches OSIts reference sites. In addition, this map reveals and when it will happen the next launch of Windows: 2012. 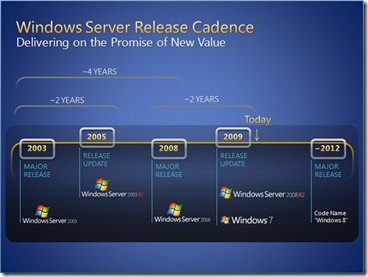 This confirms what Microsoft said earlier this year, namely that will try to keep a period of 3 years between the main releases of Windows.

It remains to be seen whether future OS, currently known - and predictable - "Windows 8 ", Will take seriously the role of "Major release" in the year 2012 or another year will wait for you, two ... In any case, the curiosity of many of us has already been aroused: Windows 7 has become accessible to everyone (obviously, for a fee: P), and soon it will become history, just like XP or Vista. But the future operating system Windows is the new challenge.