It is already confirmed: fashion is repeated every few years. This year current mini He struck again. But not in the textile industry, but in the IT. after launching Eee PCacquis those from Asus and announcing entry into production by Dell the first series of Mini 12, Korean firm Moisture New Fashion pushed to extremes, mini-laptop created which is only slightly larger than a phone (not true of the mini-phones), with approximately dimensions one vocabulary (remember those books that are writing down, years ago, the activities during class meetings? : D). It weighs only 315 grIe less than half kilos, and is "formed" a provide input Intel Atom 1,33GHz, RAM 1GB and a Hard Drive 32GB, of type SSD (Enough to hold an operating system that Windows XP or Linux). 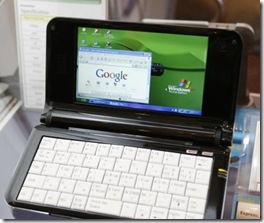 Mini-notebook also has a 1,3 megapixel camera, Located near the screen with a resolution x 1024 600 si 4,8 inch diagonalAnd the internet is via WiBro, WiMAX, HSDPA, WiFi or BluetoothMini-dimensions not allowing integration of a NIC usual. What is not known is how much autonomy can offer this tiny laptop battery and, especially, when it will be launched and how much it will cost.