Today at 10: 30 started scientific experiment in Geneva, In which researchers want to know the answer to the question "How to create the universe?"Simulating orgasm an explosion of type Big Bang (Fireworks, firecrackers, fireworks and black holes, etc., which led to the creation of Earth. CICA).

Opinions are divided about this experiment. Many scientists say that it is a step (If the experiment fails, it is possible to move forward a few kilometers in the galaxy) for mankind, while others put their wonder whether this experiment will lead to End of the World.

CERN resources are impressive. ~ 10.000 of scientists and over 5 billion for this experiment whose effects begin to be felt.

Google is about to disappear into a black hole proportions. Live Images on google.com: 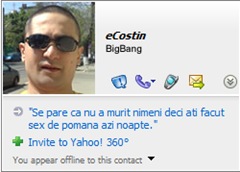 The first effects of the experiment in Geneva - BIG BANG!