Feeds and YM media sites like PC today we opened the first hour (14: 00 about when I wake up), all with a single subject: "GOODBYE, STEVE! The Crocodile Hunter, died stung by a poisonous fish .. " .

Known for TV documentaries that were shown around the world on the wildlife especially reptiles that have brought the nickname "The Crocodile Hunter" Steve Irwin died on 4 September 2006 because of a puncture caused by a stingray venomous during an underwater expedition. Irwin was filming a documentary in the Great Barrier Reef in northeastern Queensland state. 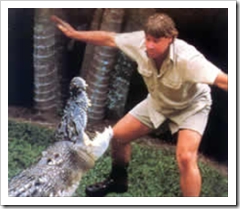 Australian authorities say the incident is as regrettable as it is surprising because, in that area, there were no attacks stingray. As he told his cameraman Steve, the cat attacked because he felt threatened.

Too bad for him! A man who has attracted millions of admirers just by the fact that all he was doing was holding you breathless. A man who knew that any documentary made by him could be the last and even think it would have been stupid to hear that died from another cause. He left behind several documentaries unique and memorable name "The Crocodile Hunter".