Tuesday, December 2 2008 in Factory club Bucharest will be a Super Paramore concert. If I have not convinced you not to miss when he mentioned and those from Grapevine si Idea and also added that the event initiated by Cabral will attend and Dan Puric si Passepartout Theatre Company. And if you need another urge, then come with completing the event is held Charity, Hoping that tiny diagnosed with acute lymphoblastic leukemia, Erika-Eleny JosianeWill have a chance to defeat the disease that takes no account of early age (2 years still unfulfilled) Or family pain. 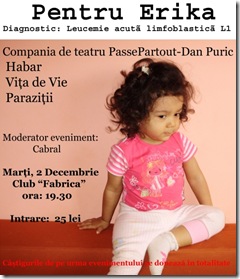 PS And if you wonder what the people at Paramore now have charitable events, then you should remember that they were among the first to put a alarm and other X painful Romanian nation through their instigating cultureThe campaign supported by Ministry of Culture si Romanian Television.

Super-concert parasites !!! Have I convinced you?