User Account Control (UAC), is a new security technology introduced by Microsoft, for the first time on operating systems Windows Vista. This is intended to improve Microsoft security Windows, by limiting the launch of software applications by a user who does not have administrator privileges. When installing the operating system Windows Vista, The user who creates have administrator privilegesBut it can not launch an application without this not be approved by the administrator. 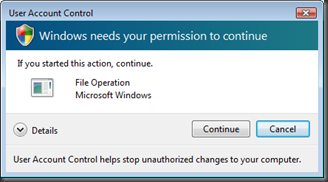 "Windows needs your permission to continue", Is the message given by UAC each time you want to launch an executable that has not been installed by the administrator. If you have software to install, right-click on its installation kit and you will see the option "Run as administrator ”. This option installs the program under the privileges of system administrator.
By introducing UAC operating systems limited the possibility of infection malware si rootkits. Virtually any application can not be launched without the admin.
UAC, and role play anti-virus / anti-rootkit. In a few months ago, two IT magazines in Germany published the results of a security test done AV-Test.org . The purpose of the test was to show how well protected against rootkits systems Windows Vista (UAC incorporated) compared to Windows XP .
The most popular 30 rootkits were used for testing. On Windows XP, none of the system protection measures could stop the rootkits. All 30 managed to run. On Vista, only six rootkitsGroups were able to run in the condiitile UAC was disabled . After UAC enabledAll rootkits were identified and stopped in time .

Despite the many criticisms Microsoft has faced at launch Windows Vista, UAC is an essential feature of the operating system, which ensures stability and security over time.