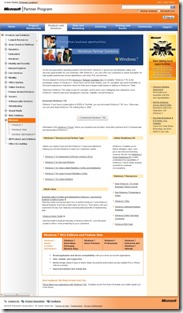 A few hours later, the text was replaced with the initial, Where we were told that during the download of Windows 7 Beta finished.

But the announcement about release date Windows 7 RC spent enough online to give new impetus rumors created around it. And rumors say that, although Microsoft himself announced that it will be on May 5thIt seems that the posting was a accidentalSimilar to the one a few weeks ago on technet.microsoft.com. That after the initial launch date was set (all Microsoft) on April 10 2009. So 5 anymore? 5 June? 5 July? Only Microsoft knows (or not). So far the only confirmed release Candidate is available for OEMs (Dell, Siemens, Toshiba etc.).

But until official launch a Windows 7 RC, Microsoft advises us not to download and especially not to install, versions of Windows 7 who frolic free on torrentsBecause those holding a high risk factor.

If there's one thing that we absolutely don't recommend to end users, it's that they should download interim builds of Windows 7 from torrent trackers. All such releases put end users at risk because there's no telling how the source of the leaked builds tampered with the bits.

Microsoft's official channels should be considered as the sole source of Windows NEVER development milestones. Why? Because many Can Be Affected releases leaked by hackers.

Windows NONE RC: Microsoft did it again