After purchase bids before Microsoft and rejected with difficult people at Yahoo! early in the relations between the two companies have cooled somewhat. Collaboration project between Microsoft and Yahoo! Yahoo! For messenger Windows VistaIt seems it was a failure from the start. Development application filed snail's pace, and the interaction between users MSN / Live Messenger si Y! Messenger, Remained in the versions 8.1 si 9 from Yahoo!. Even for a version beta preview, Y! M Vista, have many shortcomings compared to the standard versions / common and in terms of performance were reached two tabs IM to hinder an operating system (2GB RAM / 1.86 GHz).

On October 24 2008, Yahoo! announced cessation of development si withdrawal Y! M Vista . No surprise. After project closure Mash (Social Network), it was foreseeable that the next project will be closed from Yahoo!.

I feel that the next project will fail just like Mash, will be Yahoo! For messenger Windows Vista. The project has not yet emerged from beta and is far from complete (at least from what we have shown so far, those of Yahoo!). So be ready YM for Vista, Microsoft will launch Windows 7 (~ Blackcomb Vienna).

In the third semester of this year, Yahoo shares fell three times. Likely to fall or if they'll go all in this style. Each failed project means work for nothing and throw a lot of money. Effects are felt and ... to see ... 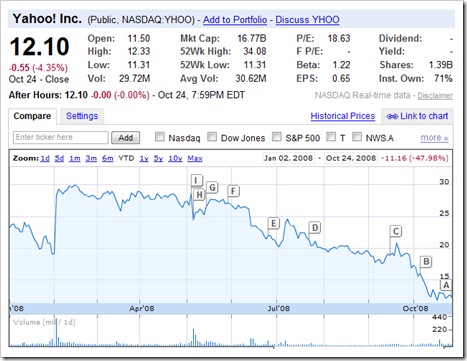 Sarah Bacon (Product Manager - Y! Messenger), explains the official blog of Yahoo! Messenger, causes that led to this decision. You can read the entire article here: Yahoo! Messenger for Vista version is no longer available.

I say o. "Feeling"? :) The maximum 2 years, most of Yahoo! Messenger users will migrate to GTalk si Windows live Messenger (Microsoft promises more). It all depends on Yahoo. Yet.