.. How cool it sounds! : D I kind of started to smile when I saw " Error: Catastrophic Failure "On the PC (OS: Windows XP) someone, although the situation was a little crazy. I have not encountered this error to date. At any attempt to install a software / driver I encountered the same catastrophe . 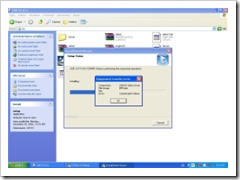 Catastrophic failure is sudden and total failure of the system from Which Some recovery is impossible. The system not only AFFECTED experiences Possibility of destruction beyond any reasonable repair, but Also frequently causes injury, death, or damage to Significant other, often Unrelated systems. As politica, catastrophic failures often lead to cascading systems failure.

Software that is installed skipping error however, only appear C: Program Files . Not occur start bar "All Programs", desktop shortcut, quick launch or systray. Okay. The best solution (in my opinion) is to format the system partition and reinstall the OS. At least in the case of the computer I printed on the screen above. Multiple system errors.

It was once a young man he was a child he wanted to make a "big" Writer. When asked to define "great" he said "I want to write stuff that you read everybody, stuff that people react emotionally, things that make them scream, cry, to scream, to struggle pain, despair and anger "is now working for Microsoft and write error messages....