Every time it launched a new operating system Windows, Microsoft include in this New Sites featureThat are not available in previous systems, but at the same time, some existing sites feature previous versions of Windows are removed from the new system (e.g., Windows 9 feature includes the desktopvirtual, which in previous versions of Windows it could only be activated with the help third-party applicationsand Charms menuIncluded in Windows 8Will no longer be available in the new OS).

While each feature Windows 7 in part to lack of Windows 8/8.1 can be reactivated with various third-party applicationsThere is an application that allows users to install (in a single process setup) These missing features in Windows 8, namely Missed Features Installer. 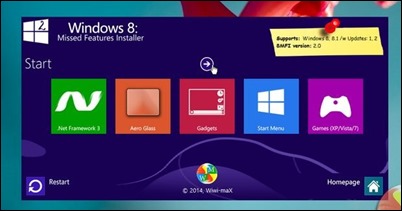 Missed Features Installer is a third-party application free which enables users Windows 8 not only to recover feature sites lack such as Start Menu, Aero glass, Desktop Gadgets or GAMES, But to customize Operating system using utility included, such as Lock Screen Customizer or This PC Tweaker. 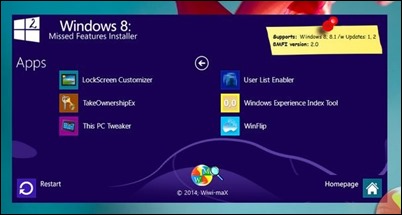 The application is compiled from several freeware utilities (Offered by developers such as IObit, Big Muscle si WinAero) For the installation and use of its users needing at least 2 GB free space hard drive (only installer size is 550 MB).