Recently, Google Reader "Enriched" with another welcome feature, that of translate feeds the default language set. Therefore, reading feeds from other languages ​​has become possible through Google Reader. So when you are interested feeds written in foreign languages, normally subscribe to them in Reader, and then translate them into the language default. To translate a feed, open feed in Google Reader, go to Feed SettingsThen select "Translate into my language". 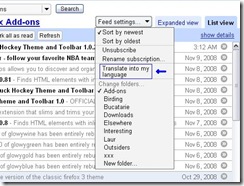 This feature, integrated Google Translate, is very useful for those who want to subscribe to feeds written in other languages. The default language is the one set in Google Reader Settings.