Although I was convinced that I had installed a good antivirus (Kaspersky AV 2009) for Windows 7 RC, the alert system of Windows, looks something else: 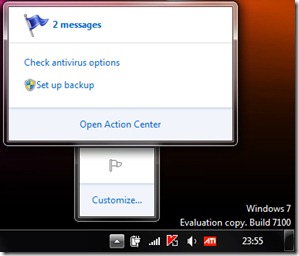 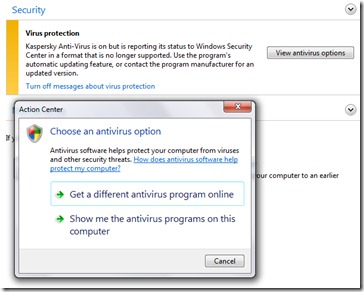 I do not think I managed to catch a virus before, even if warning messages indicate a incompatibility. Were detected infected archives, website-hate, emailSites (via Office Outlook). All anti-virus modules have been tested and all have responded well.

For users Windows 7 RC Build 7100, solution de security from Kaspersky remains: Kaspersky Anti-Virus (technical preview) for Windows 7.
Kaspersky Anti-Virus for Windows 7 is a complex security solution (more advanced than KAV 2009) for PCs running Windows 7. In addition to antivirus, this prototype contains some security solutions from Kaspersky Internet Security 2009. firewallSoftware (Kaspersky Anti-Hacker) and anti-spam filter are just two important components of KAV for Windows7. Visible improvements were made to the scan engine and Heuristic Analyzer. Heuristic Analyzer is a module blocks and stores files in a quarantine suspicious / unknown, they will be analyzed in the Kaspersky Lab.

We are about to uninstall Kaspersky AV 2009 and test KAV for Windows 7. Back. :)