Increasingly often pulled by the sleeve for one or the other (see release date Windows 7 final and the recent launch to the general public of Windows 7 RC), it seems Microsoft let him every handshake was dropped again ... More 3 limit applications open at once for Windows NEVER Starter Edition (Edition of the "poor" to Netbooks). 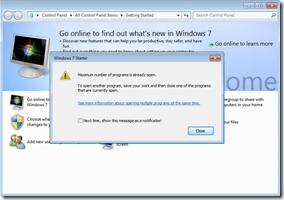 Microsoft to remove 3 app limit from Windows 7 Starter. No word yet on whether the other lame limitation – the bizarre inability to change the desktop wallpaper – will be fixed as well. To be honest, this is a bigger issue than the 3 app limit, which sounds horrible but doesn't actually come up all that often if at all.

So what would it be? It was confirmed that the 500 testers enrolled in the program feedback to Windows 7 they will get Mocco licenseAnd Microsoft will publish next month and will be prices new operating system (Depending on version). It remains to be seen how many "handshakes" will be Microsoft. :)