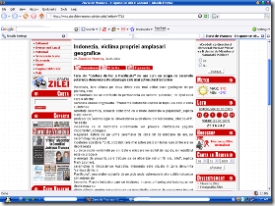 Google.ro searching something about earthquakes I found " vrancea newspaper ". Seismological edited style has Uncle who posted Article it.

After twenty-one months and give all day so the beginning lu '2007 and eventually produced the Sarva made, adicatelea to CaJau vrincensc, and wallet.

Not even stepped well and n-The town native and began to pour countless donuts, which I usually difficult, if not impossible, so called. Cica pin'acusica the onset of any state comes to be his last mistress in den resorts Haustriei mountains. He schooled himself in favor vrincenimii they say (on the lu 'baneii who has shown as not hard-predicted) structural foande pintru courses organized by the CoR evropenesti.
Everyone who I strive,
LEAP swallow hard on these,
Even if it's the vrincenesti,
Lies d'this birjaresti.
She would be one more thing:
To give you the brand,
Den sits public budget,
Do not trebe d'ASET courses,
Nor fo patalama. [...]

They say ... that's published a few minutes ago.

Battles of the case have their stake-n cheese