If you prefer to keep your hands more on keyboard and help less mouseOr if the mouse office and have failed than work Microsoft Office, You should know that using the keyboard have access to almost all options and commands Microsoft Office 2010.

Each ribbon al Microsoft Office can be opened using keyboard. Pressing OTHER in Microsoft Word 2010 we will notice that there will be a ribbon next to each ribbon letter or number.

If we need to navigate to the tab "Insertion"It is enough that after ALT or ALT simultaneously, press the corresponding letter key ribbon"Insertion. "I mean the"N".

Once in the ribbon "Insertion"we will notice that under each option under"Insertion"We have other characters (letters) shortcut. 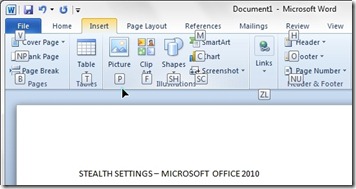 For example, if we want to insert a picture a document Office Word 2010, using only the keyboard, Just press OTHER > N > P.
Notice in the image above that some options are right by two letters. Under "Shapes"For example we have the letters"SH. "This means that under the option" Shapes "we and other options or elements. If you press the keys OTHER > N > S > H will open items in "Shapes". 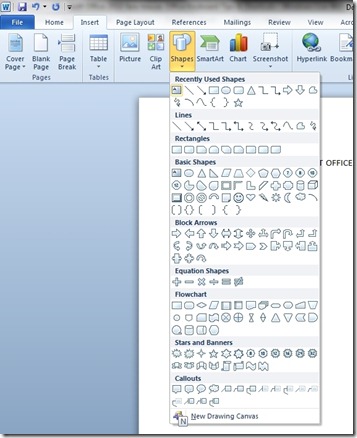 These can be selected using the keys "arrows"(arrow keys) & Enter. For "New Drawing Canvas"Keep pressing the key"N".

Besides combinations of keys OTHER the examples above, when it comes to publishing / text manipulation, We have at hand a series of keyboard shortcuts.

These are just a few keyboard shortcuts for Microsoft Office. If we know and others can leave comments and we'll update the list above.