He stayed less than a month until the event Windows 10: The next chapter will be supported by Microsoft in the second half of January 2015 (Ie the date of January 21When, most likely, will be launched next version beta a Windows 10, Namely version Consumer Preview). 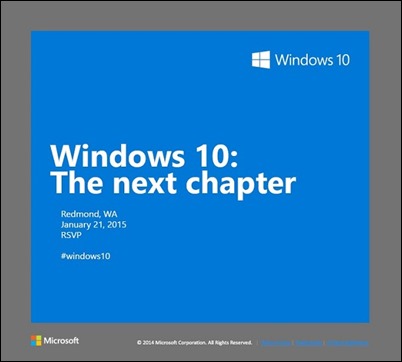 To meet users eager to test the new official build al Windows 10Microsoft has released a new utility, named Prepare this PC, With which users systems Windows 7 si Windows 8.1 will be able to upgrade to the next preview version of Windows 10 by Windows Update (Those running version Windows 10 Technical Preview build 9879 already have this feature enabled in the system).

Although Microsoft does not recommend users to install a preview version of the system Windows on a main computer (Especially if it contains important datesBecause they can be damaged or destroyed by any errors or become vulnerable) if you have a second computer that can test such a version, download the utility Prepare this PC on Microsoft official siteThen run it to activate upgrade to Windows 10 Preview (version to be released in January 2015) through Windows Update.

If you prefer to make a clean installation new releases Windows 10 Preview instead upgrade is via Windows UpdateMicrosoft will provide users and ISO image installation its (currently at download link shown below is available ISO image the first version Windows 10 Technical PreviewBut it will receive automatic by Windows Update upgrades for new versions released by Microsoft).