Bots - programs can automatically run without the need for human interaction - were originally created in order to help in any way to damage computers or networks. Functions bots were - and still are - very useful search engine (for indexing sites), sites for auction, chat online or games. But because they can automate almost any command or task the computers that are present later were amended by category special of users and used for mining: for sabotaging the bandwidth, for spam, for infecting computers and networks with various types of malware, for perform DoS attacks, for initiation fraud clicks (Online advertising) or plagiarism.

Given that antivirus not always used to detect bots that threaten computers - and here we refer in particular to free antivirus – Trend Micro created a free software (Anti-bot monitoring tool) Specializes in identifying and blocking, namely IDE. It actively check your computer to ensure that no bot with "evil intentions" does not pass borderAnd notify users to take action if the computer detects their presence. 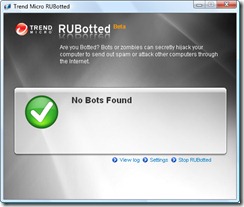 How does the IDE?

First identify dangerous bots IDE system (where they exist in the system) and then identify processes correlated with them. Soon after, request a scan and Cleaning the computer to get rid of unwanted guests. The window Settings have the option to include (or exclude) some tool monitoring sites (http, smtp, irc or dns) and you can choose to connect to Internet by proxy (Any type of an Internet connection is recommended that IDE can perform daily updates about us bots or new behaviors databases the Trend Micro). 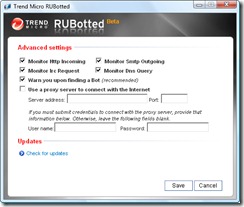 Note: Due to incompatibility between the software, the IDE can not protect users Panda Internet Security 2008.

HijackThis dangerous bots you away from your PC (Anti Malicious Bots)