Will say at the outset that this tutorial It is only useful for those who computers or laptopATVs with a CPU configuration bigger than Dual-Core (Ie processors at least two cores). I mean true for most computers and laptops products in recent years 3-4 :)

Normally processor is required for some actions / processes operating system or when open a program or perform certain operations when that program. For example, if open PhotoshopCPC and then let the program taskbar without working with him, you see that the processor is required for several seconds, after which it returns to consumption 0%. (Status can be sight in Task Manager> Performance) 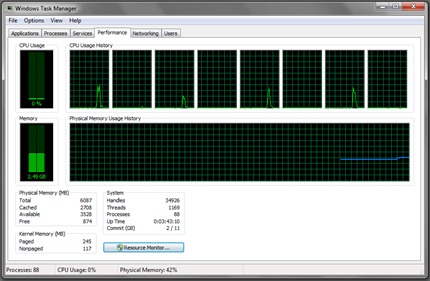 In the situation above were solicited only 4 8 of the available cores the CPU.

Daca We are running an application or a game that Standing require all nuceleele processor a value of over 90% or even 100%Then we risk choosing a OS blocked. Besides, the CPU will Very hot, cpu coolerCPC (fan) will be revs that can provide coolingand electricity consumption will be higher. There are also situations in which calaculatorul closes suddenly if it can not bring cooler CPU under the maximum allowable temperature.

Here as seen from Task Manager an operating system almost stuck (with CPU at a constant 100%). To obtain this result I have made the job application Xilisoft Video Converter Ultimate who apparently knows processor lead to 100% even on a laptop GHz Intel Core i7 of 2.20 :-) 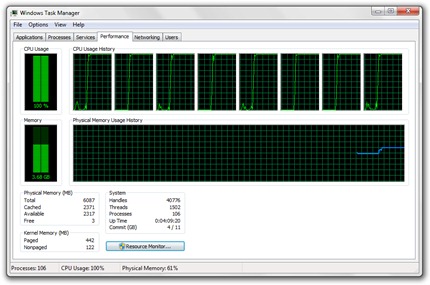 To Avoid operating system crashes while working with application or a game consuming CPU resources, we can set the Task Manager that the application or game shall only use a portion of CPU cores. In our case we will have to identify in Task Manager > Processes process used by Xilisoft Video Converter Ultimate (vc.exe).

A limited HOW TO USE application or a game only part of the available CPU cores.

1. In Task Manager > Processes We identify and make right click on the application that we want to limit (vc.exe in our case), then click on the "Set Affinity ..." 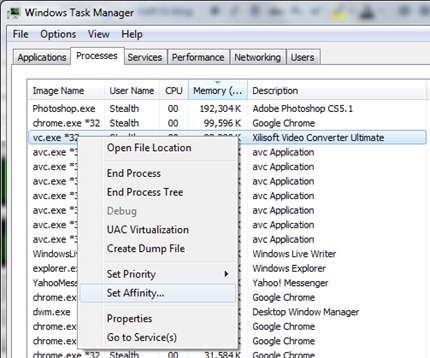 2. Vc.exe set the process not to use only 4 8 of the available cores. We only tick the first four CPU cores and click OK to save the settings. 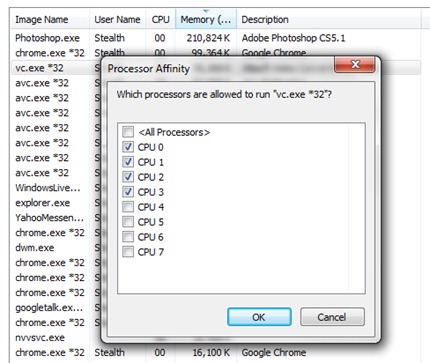 3. After application put back to work one to notice that it will not only use the 4 cores. 4 other cores will be used by the operating system or another application.

With this limitation (affinity) of CPU resources for application in half due course as the execution time will increase. The application will "move" somewhat slow, but it can not block the execution of operating system or other programs on the system.

It is noted that the affinity of the CPU It can not be set for processes operating systemAnd this setting not maintained after the restart process for which it was set. 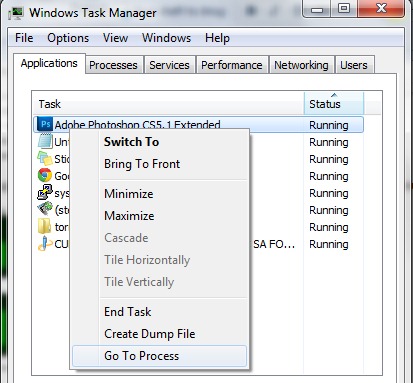 processor (CPU) is requested most when are playing big games (And I do not mean to Solitaire), we use graphics editors (Like Adobe Photoshop) video editors (Are the largest consumers of CPU resources, especially when besides video card is a Intel HD Graphics) And last but not least when you watch a Film in HD.

A limited HOW TO USE application or a game only part of the available CPU cores.