One of the important issues reported by users about new operating system Windows 8.1 it is the appearance lag or even blocking (Freezing) cursor mouse when running certain games (Among those commonly affected include Call of Duty, Counter Strike, Half Life, Metro, Tomb Rider etc.). Although initially it was thought that lag or cursor freezing They were caused by poor configuration of the systemIt seems that no matter how RAM has or how advanced the computer processor its problems with the games listed above (and others) persist. Also, in certain games cursor is displayed either much higher or much lower compared to its normal size, which affects User experience.

Fortunately it was discovered that the reasons for these errors from Windows 8.1 are changes made to Microsoft in terms of processing mouse for input and scaling bitmap certain applications desktopWhat causes different behavior of the games mentioned above the new operating system compared to their behavior on previous versions of Windowscommunity. And fortunately everything solution It is very simple.

How to get rid of the lag and / or freeze the mouse cursor while running certain games in Windows 8.1?

If you encounter problems and mentioned in connection with the mouse when you play certain games Windows 8.1Solution is disable display scaling si Their running in compatibility mode (compatibility mode) with previous versions of Windows. 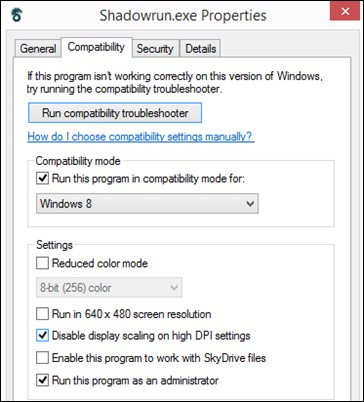 And that's it. You will not encounter errors mouse cursor (lag or blocking) While running games for which you changed Compatibility settings.

If you do not want to repeat the steps described above for each game in hand with which you have problems, you may use Fixed site offered by Microsoft (KB2908279) To resolve these errors.

STEALTH SETTINGS - How to fix mouse lag while playing games in Windows 8.1

How to solve the problem of mouse lag during games in Windows 8.1