Recently, NVIDIA confirmed both the complete technical equipment of the new GTX video cards Titan XAs well as the sale price. The new But by the full GPU acceleration tech 3.072 has the CUDA cores, 8 billion transistors and a bandwidth of 7 teraflops. There are also other 0,2 teraflops calculations that require high precision. NVIDIA compared the new video card Intel Xenon with 16 cores, revealing that an analysis of neural networks which he completed in 43 days Titan X can finish in just a day and a half, using instructions GPGPU. The cost is 999 dollars in the United States predecessor subtituid Titan BlackWhich entered the market at a similar price.

Along with its new console Android TV, NVIDIA revealed and a new graphics card top: Titan X. It is the fourth member of the Titan range, which offers solutions for video enthusiasts who happens to be the most powerful product of its kind face up in just moments. Unfortunately, we do not have too many details about the capabilities of this motherboard. NVIDIA keep detailed presentation of Titan X for later, but we provide important information. 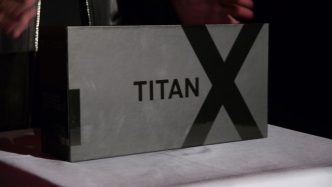 Titan X is a solution single-GPU which will be at launch its most powerful on the market. This performance will be achieved thanks 12 GB video memory and the 8 billion transistors will find inside it. Titan X everything is built on architecture Maxwell GM200But integrates a chip with 30% higher than GTX 970 si GTX 980.

Disclosure was made in the Game Developer's Conference and graphics engines epic Games, Which is currently working on a new Unreal Tournament game free and a free-to-play title called Fortnite. These are based on Uand NVIDIA appears to be in good relationship with Epic, which suggests that in future games that will use the graphics engine could benefit from the use of GTX series video cards.

Jen Hsun Huang, co-founder of NVIDIA, revealed that Titan X is a response to the needs of developers, who need performance increasingly higher. One of the reasons that need powerful graphics chips is virtual reality, which has put so much emphasis lately. To provide high frame rates and keep high quality graphics, video cards require a maximum speed that would benefit from more memory.