One of discontent iOS users It is their inability to do customization operating system. Moreover, Apple does not provide even themes implied, with which users can customize iOS interface. Fortunately for those who were bored iOS system's default appearance exist Cydia Store (But to access it you must make jailbreak device iOS), Which are available dozens of applications si tweaks for iOS customization, as well as custom themes to the system mobile.

for users iOS 7 who want to customize its layout may use tweak's HideMe7. It allows users to emelente hide UI in almost all important parts of iOS system, such as lock screen, Springboard, Notification Center, control Center si folders. 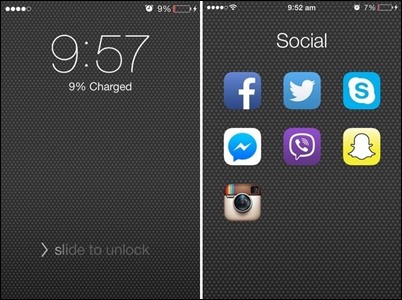 HideMe7 add after installing a extensive menu in settings iOS system (Settings App), Where users will have available a large number of toggle sites with which they can determine visibility of certain UI elements of the system. On lock screenUsers can hide grabber room, CC si NC grabber (Or CTR altogether) current date or for charging status. In Springboard can be disabled labels for icons (labels), background for folders sites, points for pages / screens or flash from screenshots. 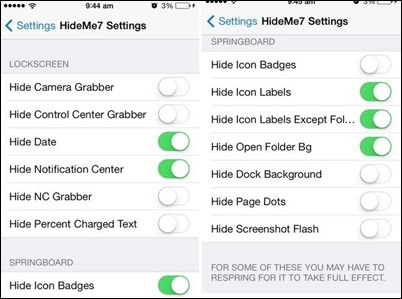 HideMe7 It has an entire section dedicated postsUsers can hide items and UI of this application, such as type messagesTimEmbossed sites or certain elements of background's message (bubble tail). But the most populated section tweak's It is for Status barWhere users can hide almost all icons which can be displayed in it. And users who tend to accidentally open Store site when listening MusicHave the option to hide this icon to avoid future such accidents. 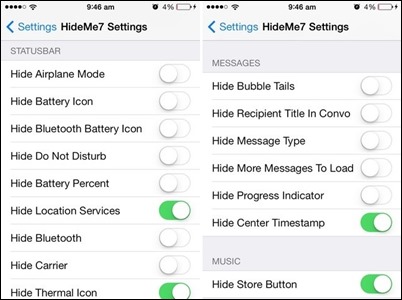 Because changes made with HideMe7 to take effect, users will have to give respring the device. But as there is no such option in the application, we recommend to use tweak your Winterboard for this thing. HideMe7 It is available to download for 0.99$ in repository Big Boss from Cydia Store.

STEALTH SETTINGS - Hide elements from the interface with iOS 7 HideMe7