Behold, finally, Apple allows you to test iOS updates before they are available to all users iPhone, iPad si iPod touch, even if you are not a developer or your device is not registered in a developer's account. program AppleSeed prerelease testing OS X is now available for iOS. So, anyone who enroll in the program now starting earlier will be able to access a newer version of iOS, which is found currently in testing stage.

The first iOS version offered in this program is of course iOS 8.3The third update released to developers tonight, is now available for all users enrolled in the new program. To download it, all users need to do is to sign on website Apple Seed cu ID Apple and its associated password, and then wait for it Apple send them the update. 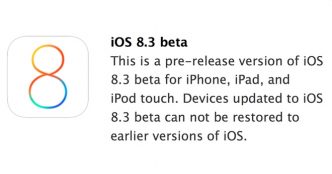 A change which heralded a few minutes before launch, is related to changing the page layout AppleSeed. Given that, since last year and until now, the public beta testing program has only been available for OS X (Macs) Made presentations on concerns only the operating system. Now the situation has changed and page AppleSeed Multiple refer to iOS, iPhone si iPad, most of which can be found in the "Frequently Asked Questions" section. There Apple even describes one way that users can make the transition from prerelease version to publish a new iOS version.

Available in February, iOS 8.3 an update is quite important as it brings users many new features that are sure there are many who wish to test before launch is likely to take place over several months. Until now, iOS 8.3 300 introduced new emoji charactersA new menu for selecting their multiple new languages ​​for SiriCompatibility with two-step verification system of Google, Wi-Fi connectivity CarPlay some updates to Messaging.

It should be noted that this program is currently being launched and may not be available to everyone. We also do not recommend installing iOS beta than a iPhone or iPad backup and not before making a backup, as there is a risk of data loss. Although currently only available for iOS 8.3The program will be extended and probably other major versions of iOS including 9 iOS beta.